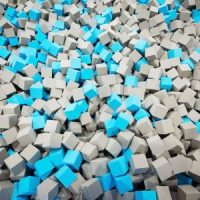 TwitchCon is like a Comicon for gamers, apparently. The popular social media site, Twitch, is used primarily by those who live stream their gaming. The event was held in San Diego and featured an interactive display in which a thin layer of foam cubes were placed over concrete. Attendees were invited to battle one another with foam weapons and attempt to knock each other off of raised platforms. The goal was to effectively knock their opponent off of their platform. That was how you won. Unfortunately, the losers ended up with more than just bruised pride.  Some of the losing participants  ended up with spinal injuries and, as a result, two have now filed a lawsuit against Twitchcon. Needless to say, both plaintiffs signed waivers prior to their injury.

Those at the convention expressed outrage at the exhibit stating that it was unreasonably dangerous. While the platforms were only 2 feet high, the thin layer of foam failed to protect failing individuals from the bare concrete underneath it. Presumably, Twitchcon presumed the waiver would prevent it from getting sued over injuries resulting from the exhibit.

One social media notable said she broke her back in two places and required a surgical rod to be installed for support. In both cases, the women jumped off the platform after winning their match. The foam cubes provided little to no cushion and both sustained injuries that required medical attention and took them off their feet for a while. In the second incident, the woman reported that she dislocated her kneecap.

The pit was open again to participants again the following day. Despite being open, Twitchers flocked to the exhibit to take pictures and make posts but refused to participate in the exhibit. They were told that they would need to sign waivers in order to try the exhibit, and apparently, that wasn’t a great draw.

This case likely hinges on whether the waivers are enforceable. That is, could a waiver prevent an individual from filing a lawsuit against Twichcon or those who ran the exhibit? The short answer is no, but the waiver could dictate how the injured participants can pursue their claims against Twichcon for their injuries and whether the risks of the event were properly disclosed. Often times, a waiver includes language that waives a plaintiff’s right to a jury and requires any claims be brought before arbitrator of the company’s choice as opposed to a lawsuit in court. Arbitrators tend to be preferred by companies as they are more predictable than juries, less expensive that court proceedings, and arbitrators are not swayed by emotional appeals as frequently.

However, if the venue lured individuals to the exhibit under the pretense that the exhibit was safe and it turned out that the exhibit was not safe because there was insufficient foam to pad a fall, then the venue could be held liable. The waiver can restrict what types of lawsuits are filed and how or where they are filed, but they cannot prevent an individual from suing. For more information on the successful use of waivers to limit personal injury claims, see the cruise industry.

Cameron Law represents the interests of those who are injured by acts of negligence. Call our Las Vegas personal injury lawyers today to schedule a free consultation and learn more about how we can help.

By Cameron Law | Posted on November 28, 2022
« How A Demand Letter Can Move Your Personal Injury Claim Forward
Photographer Claims Injury After Davante Adams Pushed Him To Ground »