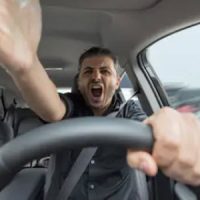 Have you witnessed road rage? If so, you may know how scary it can be and how out of hand it can go. Road rage may start with some honking and yelling, but it may escalate to situations involving reckless and intentionally harmful driving. In one recent Las Vegas road rage incident, one vehicle ended up being flipped over entirely. Road rage is especially troubling as a form of potential harm, because it is so far outside of your control as a driver. Often, you are simply around the wrong driver at the wrong time. You may be doing something as “egregious” as going the speed limit, and all of a sudden you may find yourself playing defense in a game that had no reason to exist in the first place. If you have suffered injuries as a result of a road rage accident, there are ways to hold the other party accountable.

Ultimately, there is no legitimate cause for road rage, just as there is no legitimate cause for rage of any kind. The inclination to fly into a rage has far more to do with the underlying emotional issues of the individual driver, as compared to the relatively arbitrary driver who triggers them. However, commonly cited causes of road rage include traffic, slow driving, being cut off, and tailgating. If you notice any signs of road rage, give the driver as much space as possible and do your best not to engage with them or instigate them further.

Can I Sue for Road Rage?

Many instances of road rage do not rise to the level required for a personal injury lawsuit. Personal injury lawsuits, as the name suggests, require an injury to have occurred. This injury must be financial and physical in nature. For instance, you could unfortunately not sue for the emotional harm of being yelled and honked at. However, if you ended up in a vehicle collision due to another driver’s road rage and suffered an injury as a result, then you could sue the driver by bringing a personal injury lawsuit. You will have to be able to show that your injury was both financial and physical in nature. This can be established with medical bills and evidence of lost wages, as well as medical records to document the injury. Evidence of the other driver’s road rage can help you in your personal injury case by proving that they were negligent, which is a required element of a personal injury claim. You must be able to show that they were negligent and that their negligence caused your injury. In order to have evidence of their road rage be sure to call 911, describe the behavior to police, check for dash cam, traffic cam, and security camera footage, and get contact information from anyone who may have witnessed the accident or their aggressive driving.

If you have been injured in a road rage accident in Las Vegas, you do not have to navigate the process of recovery alone. Contact a Las Vegas car accident lawyer at Cameron Law today to schedule a consultation and find out how to get the maximum amount of compensation that you are entitled to.

By Cameron Law | Posted on October 13, 2022
« Were You Hit By A Drunk Driver In Las Vegas?
Casino Slip-And-Fall Accidents »